“…in every place there is sacrifice, and there is offered to my name a clean oblation” (Malachi 1:11)“It would be easier for the world to survive without the sun than to do so without the Holy Mass” (Saint Padre Pio)Malachi is the final book in the Old Testament. Malachi was the last of the twelve minor prophets of the Old Testament. Malachi lived about four hundred years before Christ.

According to Dr. Paul Heinisch, “the prophet [Malachi] speaks of a time when [God] will be worshipped throughout the world by every race, a time when sacrifice will be made to Him everywhere and by all peoples. This sacrifice will be a “perfect” oblation, it will not be marked by blemishes like those presently offered by the priests in Jerusalem. And the offering will be brought by men with pure hearts and upright intentions” (Christ in Prophecy, p.172, The Liturgical Press).

This awesome prophecy of Malachi reads as follows:“For from the rising of the sun even to the going down, my name is great among the Gentiles, and in every place there is sacrifice, and there is offered to my name a clean oblation: for my name is great among the Gentiles, saith the Lord of hosts.”  (Malachi 1:11)Dr. Heinisch, an Old Testament scholar, comments: “The prophecy [of Malachi] is fulfilled in the sacrifice of holy Mass. Here we have a true sacrifice; the object is the purest possible – the Son of God, and the Offerer, the Savior through the hands of the priest. It is, moreover, offered in all places throughout the world” (Christ in Prophecy, p.173).     Thus, in Eucharistic Prayer number three we find a palpable echo of Malachi’s prophecy. The prayer reads, in part:“You are indeed Holy, O Lord, and all you have created rightly gives you praise, for through your Son our Lord Jesus Christ, by the power and working of the Holy Spirit, you give life to all things and make them holy, and you never cease to gather a people to yourself, so that from the rising of the sun to its setting a pure sacrifice may be offered to your name.” (emphasis added) 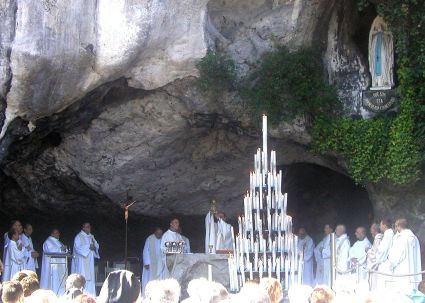 (Mass at the Grotto in Lourdes)

Father George Kosicki (who died in 2014) once roughly estimated that about “4-5 Masses begin each second,” and that “there are are approximately 8-9 thousand Masses going on at any moment” (Intercession: Moving Mountains by Living Eucharistically, p. 22, Faith Publishing Company). Even if Father Kosicki’s rough calculations are on the high side, it is truly inspiring and breathtaking to consider that at any given moment thousands of Masses are being said throughout the world and the infinitely perfect sacrifice of Jesus’ Body, Blood, Soul and Divinity is being lovingly offered to the Eternal Father. What a wonder! What an amazing phenomenon! What an amazing fulfillment of Malachi’s prophecy!

Images. Lower image: A photograph of a Mass at Lourdes taken by Lima at English Wikipedia on July 28, 2006. This file is licensed under the Creative Commons Attribution-Share Alike 3.0 unported license. Permission is granted to copy, distribute and/or modify this document under the terms of the GNU Free Documentation License, Version 1.2 or any later version. Lead image: “The Prophet Malachi, painting by Duccio di Buoninsegna, c. 1310 (Museo dell’Opera del Duomo, Siena Cathedral,” per Wikipedia. Public Domain, U.S.A.