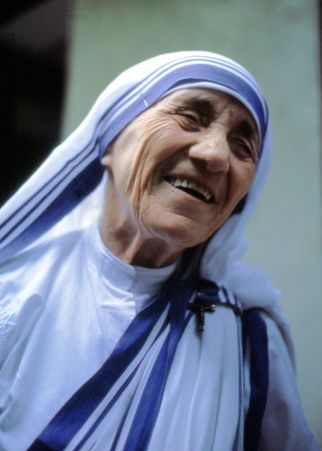 “These desires to satiate the longings of Our Lord for souls of the poor — for pure victims of his love — goes on increasing with every Mass and Holy Communion” (Blessed Mother Teresa of Calcutta).

Sometimes we get into a rut and we almost begin taking Holy Communion for granted. We must resist this temptation towards tepidity because Holy Communion is a great gift from Jesus – a priceless treasure. One Holy Communion, says Father Faber, is enough to make a saint. Faber says, “No one can tell how much grace lies in a single Sacrament.  In a single communion lies all grace; for in it is the Author and Fountain of all grace….” (The Precious Blood, page 116).

Blessed Mother Teresa (soon to be Saint Mother Teresa) was born on August 26, 1910 (about 50 years after Father Faber’s death). The Church across the street from her house was named The Sacred Heart of Jesus.  Mother Teresa – then known as Gonxha (Agnes) Bojaxhiu – made her first Holy Communion when she was only five and one half years old! But as Father Brian Kolodiejchuk M.C. (the postulator for her Canonization) relates, Mother Teresa received “an exceptional grace” on “the day of her first Holy Communion” which “fueled her desire to take this daring step into the unknown” (to form the Missionaries of Charity). Father Kolodiejchuk is referring to a letter written by Mother Teresa in 1947 to Archhbishop Perier of Calcutta wherein she related:

“From the age of 5 1/2 years, -when first I received Him [Jesus] – the love for souls has been within – It grew with the years – until I came to India – with the hope of saving many souls” (Mother Teresa: Come Be My Light, Doubleday, page 15)

“Oh how sweet the first kiss of Jesus was! It was a kiss of love. I knew that I was loved and I declared: ‘I love you and I give myself to you forever!’  …on that day it was no longer a matter of gazing: it was a union. There were no longer two of us . Therese had disappeared like a drop of water in the depth of the ocean. Only Jesus remained….”  (Image Books, page 52).

“Mother Teresa believes that the union the sisters experience with Jesus in Holy Communion is inseparable from their lives. He himself renews and refreshes them every morning at Mass. ‘Our life is linked to the Eucharist,’ [Mother Teresa] would say.  She also stated simply that without beginning each day with Jesus  in Communion, ‘we could do nothing.’ “  (The Four Teresas, page 91)

Reference: The material for this note comes from the books referenced in the note. John 4:10 refers to the living waters of baptism (the prelude to the gift of the Eucharist). See Ignatius Catholic Study Bible, page 168. Blessed Mother Teresa will be canonized on September 4, 2016 in Rome.

Photo attribution: The photo above of Mother Teresa is by Manfredo Ferrari, December 10, 1985, in Rome, available under a Creative Commons Attribution-Noncommercial license (per Wikipedia).