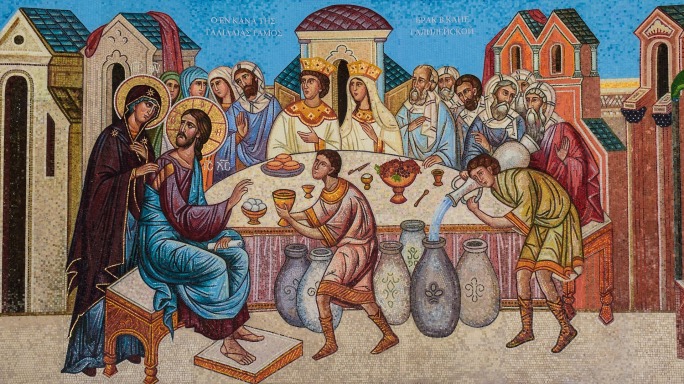 “On the third day there was a wedding at Cana in Galilee, and the mother of Jesus was there.” (John 2:1)

In Luke’s Gospel we learn of the remarkable power associated with Mary’s voice, for as soon as Elizabeth heard the sound of Mary’s voice “the child leaped in her womb and Elizabeth was filled with the Holy Spirit” (Luke 1:41). Amazing, but true!

But John makes an even more remarkable point in this story. He tells us that Jesus’ time to perform his first miracle had not yet arrived. Jesus says, “My hour has not yet come” (John 2: 4). Would Mary dare tamper with the plans of Divine Providence, with the laid down tracts of predestination? Apparently so!

The power of Mary’s voice thus sounds again: “Do whatever he tells you,” she said to the servants (2:4), and so Jesus obeyed and right then and there changed the jars of water into wine! How significant was this miracle? John tells us: “This, the first of his signs, Jesus did at Cana in Galilee, and manifested his glory; and his disciples believed in him” (2:11).

Oh Mary, Queen of Heaven, pray for us!