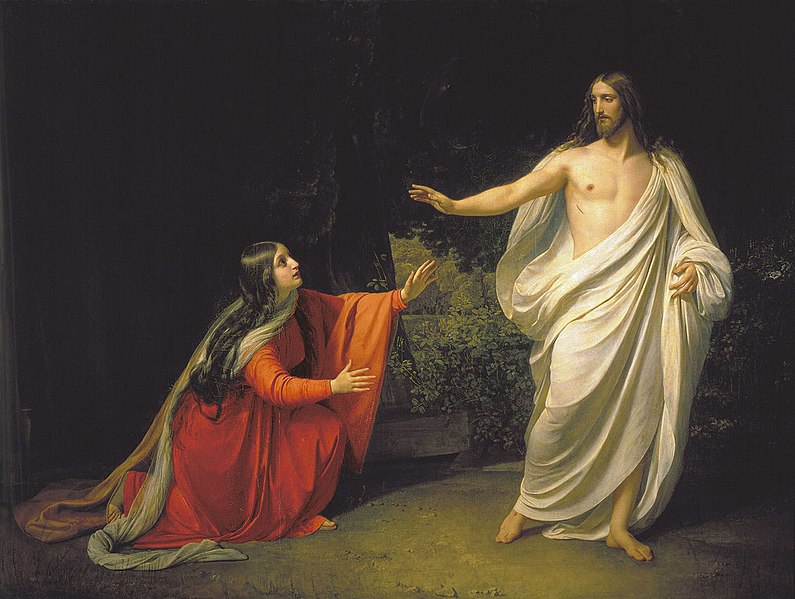 Since the resurrection of Jesus Christ is the culmination of God’s work of creation, the insights to be drawn from it may very well be infinite in number! But in this short post I offer the following five insights which I hope will be beneficial to you.

1. The women as the first witnesses to Jesus’ resurrection powerfully affirm its authenticity.

One scholar of the Lord’s resurrection, Professor William Lane Craig, offers the following insights regarding the very first witnesses to the resurrection – who were all women with respect to encountering the empty tomb and the risen Lord himself (see John 20: 10-18; Matthew 28: 1-10). “Certainly these women were friends of Jesus. But when you understand the role of women in first-century Jewish society, what’s really extraordinary is that this empty tomb story should feature women as the discovers of the empty tomb in the first place. Women were on a very low rung of the social ladder in first-century Palestine….Women’s testimony was regarded as so worthless that they weren’t even allowed to serve as legal witnesses in a Jewish court of law. In light of this, it’s absolutely remarkable that the chief witnesses to the empty tomb are these women who were friends of Jesus. Any later legendary account would have certainly portrayed male disciples as discovering the tomb – Peter or John, for example. The fact that women are the first witnesses to the empty tomb is most plausibly explained by the reality that- like it or not – they were the discovers of the empty tomb. This shows that the Gospel writers faithfully recorded what happened, even if it was embarrassing (The Case For Easter, pp. 49-50).”

2. There were multiple resurrection appearances by Jesus which left the apostles fully convinced that Jesus had risen from the dead.

For quick reference here is a summary of the ten resurrection appearances of Jesus (eleven if you include the appearance to St. Paul on the road to Damascus). Here’s the link:

It is a point not to be underestimated that Jesus made multiple resurrection appearances over the course of forty days. Thus, the apostles were not left wondering whether they had seen Jesus in the flesh following his death and burial – Jesus went out of his way on multiple occasions to make sure that they had! Consequently, you have complete uniminty among the remaining eleven apostles that they had seen the risen Christ. By way of contrast, we don’t have a case here where six of the apostles claimed to have seen the resurrected Christ, whereas three denied it, and two were not sure. And these were men that went on to live heroic lives, to suffer and die for what they had witnessed, spawning the amazing rise of the Christian faith despite insurmountable obstacles, and without any resort to violence. As the great Biblical scholar C.H. Dodd states:   “The main weight [regarding the truth of Jesus’ Resurrection] … is placed on the testimony that Jesus was ‘seen’ alive after death, by a number of his followers….” (The Founder of Christianity, page 167).  “Something had happened to these men, which they could describe only by saying they had ‘seen the Lord’. This is not an appeal to any generalized ‘Christian experience’. It refers to a particular series of occurrences, unique in character, unrepeatable, and confined to a limited period” (p.168). Dodd therefore concludes:
“[For] the original witnesses [the resurrection of Jesus was] an immediate, intuitive certainty. They were dead sure they had met with Jesus, and there was no more to be said about it….Now they were new men in a new world, confident, courageous, enterprising, the leaders of a movement which made an immediate impact and went forward with an astonishing impetus.” (p. 170)

3. Jesus instituted the Sacrament of Confession during one of his resurrection appearances.

Jesus wished to continue his ministry of the forgiveness of sins through the Apostles and their successors. Thus, following his glorious resurrection, Jesus conferred on the apostles the power to forgive sins, a power Jesus himself had exercised during his earthly ministry. It is recounted in John’s Gospel that, during a resurrection appearance, Jesus met with the apostles and said to them, in particular: “Peace be with you. As the Father has sent me, even so I send you. And when he said this, he breathed on them , and said to them, “Receive the Holy Spirit. If you forgive the sins of any, they are forgiven: if you retain the sins of any, they are retained” (John 20: 21-23)Confession, thus, is a Resurrection gift from Jesus who has passed on his ministry of forgiving sins (what we call the Sacrament of Confession) to the apostles and their successors.  From our Lord’s Resurrection blossomed this great gift for thechurch! Paragraph 1461 of the Catechism of the Catholic Church thus states:

“Since Christ entrusted to his apostles the ministry of reconciliation, bishops who are their successors, and priests, the bishops’ collaborators, continue to exercise this ministry. Indeed, bishops and priests, by virtue of the Sacrament of Holy Orders, have the power to forgive all sins “in the name of the Father, and of the Son, and of the Holy Spirit.”I don’t know how to say this: forgiveness of sins is the greatest need every person has. Jesus, in His Infinite Wisdom, and in His genius as the leader of souls, has willed that forgiveness of sins be readily available from his priests, where the concrete actions of forgiveness, absolution, and spiritual guidance can take place in a powerful and effective manner appropriately tailored to our human situation, and leading thus to an authentic spiritual resurrection of our souls!

4. Jesus’ wounds are a special manifestation of his resurrection.

One of the most fascinating aspects of Jesus’ resurrection is the existence of wounds of crucifixion on his resurrected body (see John 20: 20). We are all familiar with the apostle Thomas being invited by the resurrected Jesus to touch his wounds (John 20:27). And at Luke 24: 36-41 Jesus appeared to his disciples saying “Peace to you.” But Luke recounts that the apostles “were startled and frightened, and supposed they that they saw a spirit.” Jesus then said: “Why are you troubled, and why do questionings arise in your hearts? See my hands and feet , that it is I myself; handle me; and see; for a spirit has not flesh and bones as you see that I have.” The Ignatius Catholic Study Bible relates that Jesus’ reference to his hands and feet in this passage pertains to “the nail marks” which “demonstrate that Jesus’ risen body is the same body that was crucified only days earlier. He carries these marks of his earthly sacrifice with him when he ascends into heaven (Rev. 5:5).”

The Catechism of the Catholic Church states:

“By means of touch and the sharing of a meal, the risen Jesus establishes direct contact with his disciples. He invites them in this way to recognize that he is not a ghost and above all to verify that the risen body in which he appears to them is the same body that had been tortured and crucified, for it still bears the traces of his Passion. Yet at the same time this authentic, real body possesses the new properties of a glorious body: not limited by space and time but able to be present how and when he wills; for Christ’s humanity can no longer be confined to earth, and belongs henceforth only to the Father’s divine realm” (no. 645).

The spiritual lesson here is that Jesus, even in his resurrected body, never wants us to forget how much he suffered in order to prove his love for us and secure our salvation. As a gifted spiritual writer once said, let us never forget the sufferings of the Lord. Father Faber adds: “O for some corner, the least, the lowest, and the last in the world to come [Heaven], where we may spend an untired eternity in giving silent thanks to Jesus Crucified!”

A wonderful reflection on our Lord’s glorious wounds, building on the thoughts of Saint Thomas Aquinas, can be accessed via the following link:

5. Jesus reestablished Peter as head of the Church during one of his resurrection appearances.

In one of the most beautiful of his resurrection appearances, Jesus appeared to the disciples by the Sea of Tiberias (John 21: 1-25), “and none of the disciples dared ask him, ‘Who are you?’ They knew it was the lord’” (John 21: 12-13). And they ate breakfast together, utilizing a charcoal fire (John 21: 9). Here, again, we see Jesus hard at work building up his apostles to ready them for the demanding work of evangelization. In this instance, Jesus directed his comments to Peter, stating:

Peter had previously stood by a charcoal fire in John 18 when he denied Jesus three times. Now, in the presence of another charcoal fire, and in order to restore and reaffirm Peter as head of his Church, Jesus leads Peter to express love for Jesus three times. Each of these three times Jesus implores Peter to take care of his sheep, and on the third time Jesus alludes to Peter’s manner of death, where Peter will “stretch out [his] hands” on a cross in imitation of Jesus.

The historical authenticity of the resurrection of Jesus’ body from the dead is well proven by the Gospel writers, especially by the numerous accounts they provide of Jesus’ resurrection appearances, and the subsequent witness of the apostles shows they were fully convinced that Jesus had risen from the dead. Indeed, almost all of these apostles went on to convincingly confirm that they witnessed the resurrected Jesus with the witness – the Greek word “martyr” literally means witness – of their own lives, which is a most powerful testimony. Moreover, Jesus demonstrates by his resurrection his great concern for the Church – this by establishing the Sacrament of Confession during one appearance, and by reaffirming Peter as head of the Church on another, and by the retention of his sacred and glorious wounds on his resurrected body in order to remind us that by “his wounds you have been healed” (1 Peter 2:24). Jesus Christ, risen from the dead, is the source of all good things for us! Gather in for your eternal welfare the incredible “POWER flowing from his resurrection” (Phil 3:10).