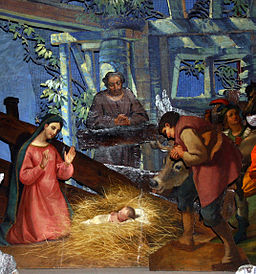 Micah is not a book in the Bible that gets a lot of attention. Yet, there is in Micah an awesome prophecy about the birthplace of the Messiah. Let me add that the prophet Micah lived some seven hundred years plus before Jesus Christ.

Here is Micah’s prophecy of the birthplace of the Messiah:

“But you, O Bethlehem Ephrathah, who are little to be among the clans of Judah,  from you shall come forth for me one who is to be ruler in Israel, whose origin is from old, from ancient days.”  (Micah 5:2)

In commenting on this passage from Micah, Walter C. Kaiser, Jr., a distinguished Old Testament scholar, states: “The Messiah is the great Ruler who will come one day. According to his human heritage, he will descend from the family of David who lived in Bethlehem and will be born in that same town, even though he has a divine line of descent that takes him clear back to eternity. He will be both human and divine. What a mystery!” (The Messiah in the Old Testament, p. 154).

Matthew cites this prophecy of Micah as being fulfilled by Jesus’ birth in Bethlehem (see Matthew 2:6). How far back in time is the origin of this great ruler and Messiah? Saint John provides the clearest answer:

And the prophet Isaiah, a contemporary of Micah, adds his own prediction about the extraordinary credentials of the future Messiah, saying:

“For to us a child is born, to us a son is given, and the government will be on his shoulders. And he will be called Wonderful Counselor, Mighty God, Everlasting Father, Prince of Peace.” (Isaiah 9:6)

A dispute among Bible scholars is whether the Hebrew word “olam” in Micah 5:2 refers to an ancient time in temporal history or to an everlasting time in eternity. Clearly, Walter Kaiser, Jr. sides with the interpretation that points towards eternity. But from a Christian perspective the dispute is somewhat moot because we know that Jesus (as both man and God) descended from the ancient line of David, and also from his eternal generation as the Word of God. In either case, at a minimum, the prophet Micah correctly foretold the birthplace of Jesus in Bethlehem and his descent from the ancient line of David. Under either scenario Micah’s prophecy of the Messiah to be born in Bethlehem is quite remarkable! Moreover, Micah 5:4 demonstrates that with the fulfillment of the prophecy the Messiah’s dominion and greatness shall extend “to the ends of the earth,” a prediction of the greatness of the Messiah (see Pulpit Commentary).

Image/painting (used with permission): From Wikipedia: “Detail from the distinguished Nativity scene, painted on paper sheets glued on wood paneles, was made by Francesco Londonip (1723-1783) around 1750. It is on display in the Capella del Presepe in san Marco church in Milan. This kind of presepe was rather common in the past, but only few such specimens survived to us. This one is remarkably well preserved, and it was carefully restored a few years ago. Picture by Giovanni Dall’Orto, April 14 2007.”