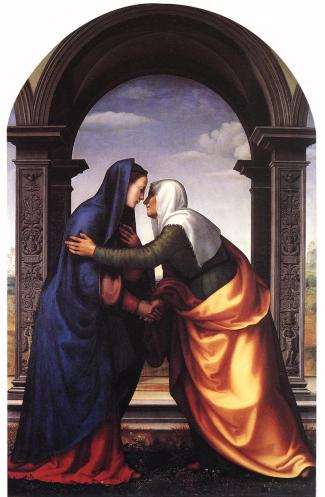 “At the sound of Mary’s greeting, Elizabeth’s child leaped within her, and Elizabeth was filled with the Holy Spirit.” (Luke 1:41)

The scene in Luke’s Gospel (Luke 1:39-56) involves two women who are pregnant. Mary is pregnant with Jesus. Elizabeth is pregnant with John the Baptist. For those who have eyes to see, Saint Luke is clearly telling us amazing things about Mary’s role in the Incarnation!
Mary’s first instinct, so to speak, after being overshadowed by the Holy Spirit and conceiving Jesus, is to go see Elizabeth.  By going to visit Elizabeth, Mary acts as a mediatrix of God’s presence. Mary knows that there is “divine grace” within her and she journeys to “mediate this grace” to Elizabeth. Is this not what Luke is showing us in a very beautiful and subtle way? ( I am relying in this note on the insights of Adrienne Von Speyr in Mary in the Redemption).
Mary’s visit has an extraordinary effect on Elizabeth, for Luke tells us that upon hearing Mary’s greeting, “the babe in Elizabeth’s womb leaped  for joy and Elizabeth, filled with the Holy Spirit”, praised Mary, exclaiming:
“Blessed are you among women, and blessed is the fruit of your womb! And why is this granted me, that the mother of my Lord should come to me? For behold, when the voice of your greeting came to my ears, the babe in my womb leaped for joy. And blessed is she who believed that there would be a fulfillment of what what was spoken to her from the Lord.” (Luke 1: 42-45)
These are tremendous words uttered by Elizabeth. Let us see exactly what happened when Elizabeth first heard Mary’s greeting. The sequence of events is breathtaking:

1. The babe in Elizabeth’s womb (John the Baptist) leaped for joy;

2. Elizabeth was filled with the Holy Spirit;

3. Elizabeth proclaims that Mary is blessed above all other women; and

mother of my Lord”

What is further, and is quite extraordinary, is that John the Baptist has been sanctified in Elizabeth’s womb, just as prophesied earlier in the same Gospel at Luke 1: 15. Thus, through Mary’s mediation, Jesus has worked his first miracle: a miracle of grace – the sanctification of the Baptist. In this context, the Catechism of the Catholic Church states at paragraph 717:
“There was a man sent from God, whose name was John.” John was “filled with the Holy Spirit even from his mother’s womb” by Christ himself, whom the Virgin Mary had just conceived by the Holy Spirit. Mary’s visitation to Elizabeth thus became a visit from God to his people.
Commenting on Mary’s visit to Elizabeth,  Adrienne Von Speyr states:
“Once Mary has spoken her Yes and the Spirit has overshadowed her, she admits divine grace within her in the form of the Word made flesh. She herself shows, however, that this grace is meant for her, not as an end, but as a means, by going straight to Elizabeth with the child and further mediating the grace of the Incarnation to her before anyone else.                      Elizabeth is moved by a grace to which she can respond in nothing other than prayer and praise of Mary. But this grace is even richer: the child in her womb moves, stirred by the same grace. As this happens, Mary apprehends that she is beginning to mediate the Son and praises God that all generations will call her blessed” (Mary in the Redemption, by Adrienne Von Speyr, p.43, Ignatius Press).
Now, let us turn for a moment to John’s Gospel where Jesus performs his first miracle of nature at the Wedding Feast at Cana. Here again the Gospel writer – this time John – is showing us Mary’s role as a mediatrix. We are all familiar with the story. The wine has run out at a wedding feast. Although Jesus is not ready to work his first public miracle,  Mary intercedes and  water is turned into wine by Jesus, no doubt much to the relief of the bride and groom (John 2: 1-11).
Conclusion
Who cannot fail to see Mary’s role as a powerful mediatrix of grace in these Gospel accounts? In both Gospels it is through Mary that Jesus works his first miracle. What extraordinary graces were unleashed when Mary visited Elizabeth. What great confidence we should have in Mary’s intercession. How much have we undervalued devotion to her? Let us think with the mind and heart of the Church from which come the following words about Mary from the Second Vatican Council:
“This motherhood of Mary in the order of grace continues uninterruptedly from the consent which she loyally gave at the Annunciation and which she sustained without wavering beneath the cross, until the eternal fulfillment of all the elect. Taken up to heaven she did not lay aside this saving office but by her manifold intercession continues to bring us the gifts of eternal salvation. By her maternal charity, she cares for the brethren of her Son, who still journey on earth surrounded by dangers and difficulties, until they are led into their blessed home. Therefore the Blessed Virgin is invoked in the Church under the titles of Advocate, Helper, Benefactress, and Mediatrix. This, however, is so understood that it neither takes away anything from nor adds anything to the dignity and efficacy of Christ the one Mediator.” ( Lumen Gentium Vatican II §62 )

References:  I rely significantly on the following sources/references: 1. Mary in the Redemption, by Adrienne Von Speyr (Ignatius Press). 2. True Devotion to Mary, by Saint Louis de Montfort (TAN Books). 3. Ignatius Catholic Bible Study, The Gospel of Luke (Ignatius Press). 4. Documents of Vatican II. Saint Louis de Montfort calls the sanctification of John the Baptist in the womb of Elizabeth Christ’s “first miracle of grace” in True Devotion to Mary. It is Father Faber who used the expression, “Kingdom of the Incarnation.”