“…there are Catholics who do not see clearly enough the necessity of having recourse to Mary that they may attain to intimacy with the Savior” (The Three Ages of the Interior Life, Volume I, page 119, by Father Garrigou-LaGrange)

In  my own lifetime it is hard to think of two people who drew closer to Jesus Christ than Saint Pope John Paul II and Blessed Mother Teresa of Calcutta. And if the greatness of a saint is judged, in part, by the souls they led to Jesus and salvation, then the influence of Mother Teresa and John Paul II is truly staggering. What then are we to make of the meteoric rise to Beatification and then Canonization of both Saint John Paul II and Blessed Mother Teresa of Calcutta (I understand that their Beatifications were two of the fastest ever in the history of the modern church, and Mother Teresa will be canonized on September 4, 2016)? Our examination of their lives discloses a profoundly important fact; namely, that both of these “saints” were molded in the “school of Mary,” having consecrated their lives to the Blessed Virgin. 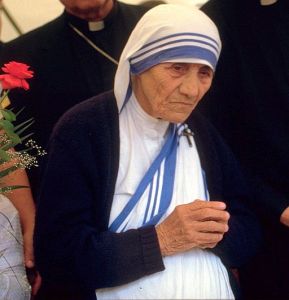 As to Pope John Paul II, he pointed to his consecration to Mary as a turning point in his life, saying:

‘The reading of this book (True Devotion to Mary) was a decisive turning-point in my life. I say “turning-point,” but in fact it was a long inner journey. . . – This “perfect devotion” is indispensable to anyone who means to give himself without reserve to Christ and to the work of redemption.’

I am currently reading Father Edmund’s biography of Saint Paul of the Cross, the founder of the Passionists, an order of priests dedicated to the love of Jesus crucified. Saint Paul of the Cross was an extraordinary man who practiced the most austere penances and was raised to a very high level of mystical union with God (“the transforming union”) by the relatively early age of around thirty years old. And as with all the saints, the Blessed Virgin played a critical role in his spiritual development and was also instrumental in helping him to establish his new order of priests.

An even more modern saint is Saint Faustina Kowalska, the “visionary of Divine Mercy” to whom Jesus appeared and through whom He established the Divine Mercy devotion. If you read her diary, the tremendous scope of her devotion to Mary becomes obvious and palpable. In her diary (79) she wrote this beautiful prayer of consecration to the Virgin Mary:

O Mary, my Mother and my Lady, I offer You my soul, my body, my life and my death, and all that will Follow it. I place everything in Your hands. O my Mother, cover my soul with Your virginal mantle and grant me the grace of purity of heart, soul and body. Defend me with Your power against all enemies, and especially against those who hide their malice behind the mask of virtue. O lovely lily! You are for me a mirror, O my Mother!

The lesson to be learned, then, is that devotion to Mary is an “essential” component of our faith in Jesus Christ, and that the lives of the saints prove – truly beyond any doubt – that devotion to the Mother of God leads to greater union with Jesus Christ. In our own time, this point is demonstrated in a remarkable manner by Saint John Paul the II and Blessed Mother Teresa of Calcutta. Thus, in the Vatican II Decree on the Apostolate of the Laity, we are told:

“All should devoutly venerate [Mary] and commend their life and apostolate to her maternal care.”