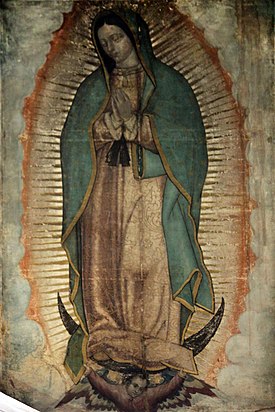 As the moral decline of the United States of America intensifies, we are in need of guidance in order to stay on that narrow road that leads to Heaven. God was not remiss in sending us a holy, anointed and prophetic voice to guide us through these troubled times. Clearly, in the years to come, we are going to need more faith and more fortitude to be faithful to Jesus Christ and his Catholic Church. But with discernment we can see that the Holy Spirit has already sent us a holy, anointed and prophetic voice in the person of Pope John Paul II, who is now Saint John Paul II  (his canonization occurred on April 27, 2014, Divine Mercy Sunday!).

Pope John Paul II was a tremendous gift to the Church, and his encyclicals contain a wealth of spiritual knowledge and guidance that is of great significance to us right here, right now. I especially recommend that we all read and meditate on the following two encyclicals as specifically pertaining to the difficulties we presently face:                      1. THE GOSPEL OF LIFE                      2. THE SPLENDOR OF TRUTHUnderstanding and implementing the spiritual wisdom of these two encyclicals will help us get ourselves and our loved ones to Heaven. There is more wisdom in these two encyclicals than all the combined worldly wisdom (or lack thereof) of the present age. Keep in mind that John Paul II was a mystic, a Pope and now a Saint. Pray for his intercession.     Now it is important to keep in mind that Pope John Paul II emphasized the critical importance of devotion to the Blessed Virgin Mary (normally ending his encyclicals with a prayer for her intercession). In his book, Crossing the Threshold of Hope, the Pope made a prophetic statement that the Church’s future victories will come through Mary, stating:     “‘Be not afraid!’ Christ said to the apostles (cf.Lk 24;36) and to the women (cf. Mt 28:10) after the Resurrection. According to the Gospels, these words were not addressed to Mary. Strong in her faith, she had no fear. Mary’s participation in the victory of Christ became clear to me above all from the experience of my people. Cardinal Stefan Wyszynski told me that his predecessor, Cardinal August Hlond, had spoken these prophetic words as he was dying: ‘The victory, if it comes, will come through Mary.’ During my pastoral ministry in Poland, I saw for myself how those words were coming true.     After my election as Pope, as I became more involved in the problems of the universal Church, I came to have a similar conviction: On this universal level, if victory comes it will be brought by Mary. Christ will conquer through her, because He wants the Church’s victories now and in the future to be linked to her.” (Crossing the Threshold of Hope, pp. 220-221).     Another prophetic statement concerning modern times comes from the great Saint Maximilian Kolbe, the martyr who died in a starvation bunker in a German concentration camp (voluntarily having taken the place of a married man). Indeed, it was Pope John Paul II who presided over the canonizaton of Maximilian Kolbe. Kolbe also prophesied that Mary would play a crucial role in combating the forces of evil that have risen up against the Church. He said:      “Modern times are dominated by Satan and will be more so in the future. The conflict with hell cannot be engaged by men, even the most clever. The lmmaculata alone has from God the promise of victory over Satan. However, assumed into heaven, the Mother of God now requires our cooperation. She seeks souls who will consecrate themselves entirely to her, who will become in her hands effective instruments for the defeat of Satan and the spreading of God’s kingdom upon earth.” St. Maximilian Kolbe, OFM Conv      WHAT SHOULD WE DO?  Those of us living in the United States, let us intensify our devotion to Mary and, in particular, to Our Lady of Guadalupe. I suggest special devotion to Our Lady of Guadalupe for the following reasons. It is now beyond peradventure that the treasured image of Our Lady of Guadalupe is supernatural in origin (see Infallible Catholic: Miraculous Image of Our Lady of Guadalupe). Moreover, to shed additional light on the importance of this apparition of Mary, its seer, Blessed Juan Diego, has now been canonized (by Pope John Paul II on July 31, 2002). In this famous apparition which took place in Mexico in 1531 Mary’s appearance transformed the brutal Mayan culture of death (with is demonic worship through the gory sacrifices of human beings) into a Catholic culture of life (see and click on link below):

Our Lady of Guadalupe, We Need You More Than … –Catholic Lane).

Presently, in the United States we are witnessing firsthand a “dramatic” confrontation between the “culture of death” and the “culture of life.” We need recourse to Mary in order to defeat the culture of death and build a culture of life.  In 1910 Our Lady of Guadalupe was declared Patroness of Latin America by Pope Saint Pius X, and in 1945 Pope Pius XII declared her to be the Empress of all the Americas. On January 22, 1999 Pope John Paul II named Our Lady of Guadalupe patron of the Americas and raised her feast (on December 12) to the rank of solemnity throughout the Americas (this information is from Wikipedia and other web sites). Our Lord’s Vicars are telling us in America to turn with devotion to the intercession of Our Lady of Guadalupe!

Pope John Paul II visited Mexico five times during his Papacy, and it is now widely reported that Pope Francis will visit Mexico and pray before the miraculous Guadalupe image sometime in 2016.

References: Crossing the Threshold of Hope (by Pope John Paul II); and Reparation and the Dual Dimension of Pope John Paul II’s Consecration (by Jerome F. Coniker). Image above, Public Domain, U.S.A., per Wikipedia.  Any ads following this post are from WordPress and not this blog.

P.S. A good place to start would be to have a picture of the powerful Guadalupe image in our homes and to explain its significance to as many people as possible! Since we are so “married to our senses,” images like the miraculous Guadalupe “picture” are of immense value.