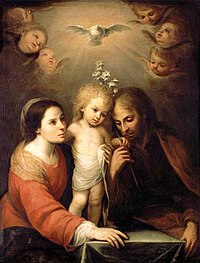 “The Holy Spirit will come on you, and the power of the Most High will overshadow you. So the holy one to be born will be called the Son of God.”  (Luke 1:35)

From time to time a Catholic speaker may make the innocent mistake of referring to Mary as an unwed mother. However, it is abundantly clear that the Virgin Mary was legally married to Joseph at the time she conceived Jesus (when the Annunciation took place). Thus, the Gospel of Matthew refers to Joseph as Mary’s “husband” at 1:19, and additionally the angel sent to Joseph calls Mary Joseph’s “wife” at 1:20 (as Joseph considered whether to divorce Mary). Again, at verse 1:24, Mary is called Joseph’s “wife.”
It is true that Saint Luke refers to Mary’s betrothal to Joseph at Luke 1:26, but as Dr. Scott Hahn points out in The Ignatius Catholic Study Bible, Mary’s “betrothal to Joseph was already a legally binding marriage.” This is why Joseph could not simply walk away from Mary without first getting a divorce, and because Joseph and Mary were legally married “such a betrothal could only be terminated by death or divorce [according to] Deut. 24: 1-4” (The Ignatius Catholic Bible Study, The Gospel of Matthew, page 18).
In his Apostolic Exhortation, Guardian of the Redeemer, Pope Saint John Paul II makes clear that at the time of Mary’s Annunciation Joseph and Mary were married. The Pope stated:

“Addressing Joseph through the words of the angel, God speaks to him as the husband of the Virgin of Nazareth. What took place in her through the power of the Holy Spirit also confirmed in a special way the marriage bond which already existed between Joseph and Mary. God’s messenger was clear in what he said to Joseph: “Do not fear to take Mary your wife into your home.” Hence, what had taken place earlier, namely, Joseph’s marriage to Mary, happened in accord with God’s will and was meant to endure. In her divine motherhood Mary had to continue to live as “a virgin, the wife of her husband” (cf. Lk 1:27).” (no. 18)

The Virgin Mary was never an unwed mother. It is entirely incorrect to suggest that God planned it otherwise.