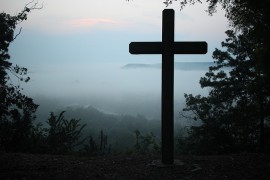 “He who knows how to forgive prepares for himself many graces from God”
(Saint Faustina Kowalska, Diary 390)
It’s in your own best interest to forgive. If you’re hanging on to unforgiveness, it’s in your own best interest to let go! You don’t want to forfeit graces God wants to give you because of a refusal to forgive. God’s will is quite clear here: – even though it can be quite difficult, we must forgive. Indeed, a plethora of New Testament passages, set forth below, speak to a spiritual law of the Gospel that, in essence, impedes us from seeking the Father’s mercy if we are unable to extend mercy to those who have harmed us.
Luke 6:37…………………..“Forgive, and you will be forgiven.”
Matthew 6:12……………. “and forgive us our sins, as we have forgiven those who have sinned against us.”
Matthew 6:14-15……….. “For if you forgive men when they sin against you, your heavenly Father will also forgive you. But if you do not forgive men their sins, your Father will not forgive your sins.”
Mark 11:25…………………..”And whenever you stand praying, forgive, if you have anything against anyone, so that your Father also who is in heaven may forgive you your trespasses.”
Ephesians 4:32……………”Be kind to one another, tenderhearted, forgiving one another, as God in Christ forgave you.”
Colossians 3:13…………..”Bearing with one another and, if one has a complaint against another, forgiving each other; as the Lord has forgiven you, so you also must forgive.”
Matthew 18:21-22……….”Then Peter came up and said to him, “Lord, how often will my brother sin against me, and I forgive him? As many as seven times?” Jesus said to him, “I do not say to you seven times, but seventy times seven.”
The Catechism of the Catholic Church, echoing the scripture passages cited above, talks about how hardened, unforgiving hearts can cut-off the outpouring of mercy. The Catechism – almost getting a little emotional – talks of this situation as being “daunting.” These important words are from Section 2840 of the CCC:
2840 Now – and this is daunting – this outpouring of mercy cannot penetrate our hearts as long as we have not forgiven those who have trespassed against us. Love, like the Body of Christ, is indivisible; we cannot love the God we cannot see if we do not love the brother or sister we do see. In refusing to forgive our brothers and sisters, our hearts are closed and their hardness makes them impervious to the Father’s merciful love; but in confessing our sins, our hearts are opened to his grace.
Conversely, the floodgates of grace open up when we honor God’s will and courageously choose to forgive. In Life Everlasting, Father Garrigou-Lagrange, the great Dominican and mystical theologian (who once taught the future Pope John Paul II), tells us of the amazing transformation of a Jewish man he personally knew who had the courage to forgive. He relates:
“I knew a young Jew, the son of an Austrian banker, in Vienna. He had decided on a lawsuit against the greatest adversary of his family, a lawsuit that would have enriched him. He suddenly recalled this word of the Pater Noster, which he had sometimes heard: “Forgive us our trespasses as we forgive those who trespass against us.” He said to himself: “How would it be if, instead of carrying on this lawsuit, I would pardon him?” He followed the inspiration, forgave completely, renounced the lawsuit. At that same moment he received the full gift of faith. This one word of the Our Father became his pathway up the mountain of life. He became a priest, a Dominican, and died at the age of fifty years. Though nothing particularly important appeared in the remainder of his life, his soul remained at the height where it had been elevated at the moment of his conversion. Step by step he mounted to the eternal youth which is the life of heaven. The moral runs thus: One great act of self-sacrifice may decide not only our whole spiritual life on earth but also our eternity. We judge a chain of mountains by its highest peak.”
Dear friend, Saint Faustina Kowalska tells us that we are most like God when we show mercy and forgiveness to others  (Diary 1148). But, practically speaking, it is simply in our own best interest to forgive. Why would we want to harm our own spiritual progress by hardening our hearts and refusing mercy to others? And keep in mind that God is constantly sending us actual graces to give us the courage and desire to forgive. God is all helpful: ask Him for the power to forgive.
Tom Mulcahy, M.A.
Reference:

See Ignatius Catholic Study Bible, page 369, fn on Col. 3:12, wherein it states: “We express gratitude to the Lord by imitating his mercy in our relationships with others. In fact, extending forgiveness to others is necessary if we hope to receive the ongoing forgiveness of the Father (Mt 6:14-15;18:23-35).”  In his book, The Seven Secrets of Confession, Vinny Flynn discusses section 2840 of the CCC.