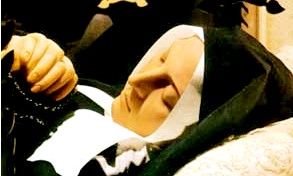 “In many ways, throughout history down to the present day, men have given expression to their quest for God in their religious beliefs and behavior: in their prayers, sacrifices, rituals, meditations, and so forth. These forms of religious expression, despite the ambiguities they often bring with them, are so universal that one may well call man a religious being ….” (Catechism of the Catholic Church, # 28)

“One of the most amazing [bodily] preservations is that of Saint Andrew Bobola [1590 to 1657]. Prior to his martyrdom he was partially flayed alive, his hands were hacked off and his tongue was torn from his head. Splinters of wood were riven under his fingernails, and his face sustained such mutilations that he was scarcely recognizable. After hours of further tortures and mutilations, he was dispatched by a sword’s blow to the neck. His body was hastily buried by Catholics in a vault beneath the Jesuit church at Pinsk [Poland], where it was found forty years later perfectly preserved, in spite of the open wounds, which would normally foster corruption. Although his grave had been damp, causing his vestments to rot, and in spite of the proximity of decaying corpses, his body was perfectly flexible, his flesh and muscle soft to the touch, and the blood which covered the numerous wounds was found to be like that which is freshly congealed. The preservation was officially recognized by the Congregation of Rites in 1835. Even though the [body] was roughly handled during its numerous translations, the body remains after 300 years in a marvelous state of preservation” (The Incorruptibles by Joan Carroll Cruz,
p. 36)
There are many other remarkable – indeed, truly miraculous – examples in the lives of the saints of the phenomenon of incorruptibility (Joan Carroll Cruz documents 102 such cases in her book). Three of the most amazing cases involve Blessed Matthia Nazzarei, Blessed Charbel Makhlouf, and the abandoned dwarf, Blessed Margaret of Castello. I cannot summarize these cases in this short note, but you will find that they are truly extraordinary examples of the miraculous phenomenon of incorrupt bodies.
If scientists draw truly important conclusions from the examination of skeletal remains what are we to make of the preternatural phenomena of incorrupt bodies which clearly have defied the physical laws of bodily decomposition? Saint Bernadette’s body is incorrupt (see photo above), having been exhumed and examined on three occasions. What are we to make of her incorrupt body? After all, it was to this lowly peasant girl the Virgin Mary appeared in 1858 in Lourdes, announcing to Bernadette: “I am the Immaculate Conception.” There are important revelations here about sin leading to death, but  holiness to life, that touch upon the most profound mysteries of our lives (ref. see “Epilogue” of Origin of the Human Species by Dennis Bonnette).
“The bodies of holy martyrs and others now living with Christ, bodies which were His members and temples of the Holy Spirit, which one day are to be raised up by Him and made glorious in everlasting life, are to be venerated by the faithful; God gives men many benefits through them.”
(Council of Trent)

The Incorruptibles by Joan Carroll Cruz (TAN Books); and Origin of the Human Species by Dennis Bonnette (Sapientia Press). The photograph above is of the incorrupt body of Saint Bernadette (to whom the Virgin Mary appeared at Lourdes).

Note: The conditions for an incorruptible, as distinguished from those who are intentionally preserved, are discussed by Joan Carroll Cruz in her book’s Introduction. She mentions on page 23 that of “all those saints mentioned in this volume, the preservation of only about one percent are credited to deliberate intervention….”