1.  CHURCH DOCTRINE
That Mary remained a virgin her entire life is a De Fide (required of the faithful) doctrine of the Catholic Church.  See Documents of Vatican II (LG57), Catechism of the Catholic Church, 499, The Mother of the Redeemer, 39 (Encyclical Letter of Pope John Paul Il, 1987), and Ludwig Ott, Fundamentals of Catholic Dogma, pages 203-206.
2. VIRGINITY FOR THE SAKE OF THE KINGDOM
Celibacy for the sake of the Kingdom is a radical feature of Christianity, and finds its biblical mandate at Matthew 19:12. Jesus, in fact, “is described” and “sees his own self identity” as that of the “celibate bridegroom” (article by Janet Smith; see also John 3:29 and Matthew 9:15). Paul presents celibacy as a highly favored state of life for believers saying, “I wish that all were as myself am [celibate].  But each has his own special gift from God….” (1 Cor. 7:7). Paul confirms the goodness of marriage at 1 Cor. 7:38 saying, “He who marries does well,” but then adds that “he who refrains from marriage will do better.” Mary embraced both marriage and celibacy, thus exemplifying in a unique way the sublime dignity of both vocations.
3.  MARY, SPOUSE OF THE HOLY SPIRIT
Mary is properly to be considered the spouse of the Holy Spirit since the Holy Spirit “overshadowed” her and was the formal cause of her virginal conception of Jesus (Luke 1:35). This is why her offspring, Jesus, “will be called the Son of God” (Luke 1:35), and this is also why Mary is properly called the Mother of God according to the decree of The Council of Ephesus in 431. Mary’s unique and “supernatural maternity” through the power of the Holy Spirit necessarily precludes her from intimate union with a man. Mary is a virgin because of her “undivided gift of herself” to God (Catechism of the Catholic Church, 506).
4.  MARY’S VOW OF VIRGINITY
The relevant verse is Luke 1:34: “How shall this be, seeing I do not know man.” These words of Mary to the Angel Gabriel at the Annunciation show that Mary did not intend to have conjugal relations with a man; otherwise, Mary surely would have known that conjugal relations with Joseph, her husband, could cause a pregnancy. Catholic theologian Stefano Manelli explains Mary’s strange response to the angel this way:
“Confronted by this [the angel Gabriel’s] wondrous announcement, however, the virgin finds herself embarrassed; not because of the sublime greatness of the majesty announced to her, but rather for the way in which such a maternity might be realized. The embarrassment would seem inexplicable because, on any reasonable grounds, she is precisely a woman in ideal conditions to conceive a son. She is the young spouse of Joseph – What young spouse would not be inclined to desire a beautiful son? It is obvious, therefore, and must be acknowledged that Mary’s difficulty stems from a precise commitment — vow or promise — “not to know man,” that is, to be and remain a virgin.  St. Augustine rightly says, that ‘Mary certainly would not have spoken those words If she had not vowed her virginity to Got” In fact, only by admitting Mary’s virginal consecration to God, can it be understood why she found herself facing an unsolvable dilemma: How to reconcile her virginal offering to God with the request of maternity on the part of God? How could she become a mother without betraying a promise of virginal consecration to God.”
(Stefano Manelli, All Generations Shall Call Me Blessed, pages 137-140)

“[The] Greek present tense used for Mary’s words in Luke 1:34 corresponds…to the Hebrew and Aramaic active participle indicating a permanent condition. Mary’s words in Aramaic were ki enneni yodaat ish, the yodaat indicating a permanent condition of virginity” (Warren Carroll summarizing and quoting from Manuel Miguen’s “indispensable” work, The Virgin Birth: an Evaluation of Scriptural Evidence (p.81) in The Founding of Christendom, Vol. I, p.310).

5. DID JESUS HAVE BROTHERS?

“It is often alleged too that such verses as Mark 6:3, “His brethren James and Joseph, and Judas and Simon,” and Matthew 13:55- 56, “his brethren James and Joseph, and Simon and Judas,” are evidence that Jesus had brothers and sisters. What is forgotten is that the Jewish expression for brothers and sisters applies to cousins and even to people in the same tribe. Although Lot was the son of Jjraharn’s brother Aran, he is described as Abraham’s “brother” (Genesis 14:14). Similarly, Jacob is referred to as the “brother” of his uncle Laban (Genesis 29:15). Similar examples are found throughout Scripture.  In any case, in Matthew 27:56, Mark 14:40 and John 19:25, James and Joseph are described as the sons of Mary, the wife of Cleophas— thus Scripture tells us that the “brethren” James and Joseph in Matthew 13:55-56 and Mark 6:3 are not blood brothers of Jesus. If James, the bishop of Jerusalem, was truly a son of Mary it would be impossible for the doctrine of the perpetual virginity of Mary to be affirmed in the early Church Nevertheless, such ancient writers as Irenaeus, Polycarp and Ignatius all taught the doctrine as an article of faith.”
(Robert Payesko. The Truth about Mary, page 2-198).

Section 500 of the Catechism of the Catholic Church states:

“Against this doctrine the objection is sometimes raised that the Bible mentions brothers and sisters of Jesus. The Church has always understood these passages as not referring to other children of the Virgin Mary. In fact James and Joseph, “brothers of Jesus,” are the sons of another Mary, a disciple of Christ, whom St. Matthew significantly calls “the other Mary.” They are close relations of Jesus, according to an Old Testament expression.”
6. MATTHEW 1:25: “UNTIL SHE BORE A SON”
The relevant verse is sometimes translated, “he [Joseph] had no relations with her [Mary] until she bore a son, whom he named Jesus.” The New American Bible translates the verse as follows: “He had no relations with her at anytime before she bore a son, whom he named Jesus,” This verse demonstrates that Joseph did not have sexual relations with Mary before Jesus’ birth, thus establishing the doctrine of Jesus’ virginal birth, The verse does not mean that Joseph had sexual relations with Mary after Jesus was born.

“The Greek hoes [until] does not imply that Joseph and Mary had marital relations following Jesus’ birth. This conjunction is often used (translated ‘”to” or “till”) to indicate a select period of time, without implying change in the future (2 Sam 6:23 [LXX]; Jn 9:18; 1 Tim 413). Here Matthew emphasizes only that Joseph had no involvement in Mary’s pregnancy before Jesus’ birth.”
(Scott Hahn, Ignatius Catholic Study Bible, Gospel of Matthew, page 18).

“The semitic locution “until” makes no judgment about the future. Thus, “Michal was childless until the clay of her death” (2 Sm 6:23) [does not’t imply Michal became a mother after her death.]”
(Dictionary of Mary, page 485)
7. MARY EXCLUSIVELY REFERRED TO IN BIBLE AS JESUS’ MOTHER
Mary is never called the mother of anyone else except Jesus in the New Testament. The Gospels refer only to Jesus as Mary’s son (the verses where Jesus is referred to as Mary’s son include John 2:1, John 19:25, and Acts 1:14). Further, as Dr. Scott Hahn points out, it is unlikely that Jesus would have entrusted Mary to the Apostle John’s care at his crucifixion if Mary had other natural sons to care for her (John 19:26-27).
8. LUKE 2:7 “FIRSTBORN SON”

Luke says: “Mary gave birth to her firstborn son” (2:7). This makes allusion to the legal prescriptions concerning the first male child of a family, even if there were no other children.
(Dictionary of Mary, page 485)

[Luke 2:7 is] a legal term linked with a son’s social standing and rights of inheritance.  It does not imply that Mary had other children after Jesus, only that she had none before him.
(Scott Hahn, Ignatius Catholic Study Bible, Gospel of Luke, page 22)
9. THE CHURCH FATHERS
The Protoevangelium of James, written around A.D. 120, had as one of its “principal aims” to prove the perpetual virginity of Mary.  Origin (died 254) strongly defended Mary’s perpetual virginity but Tertullian (died 230), who was excommunicated, denied it.  Other early Church fathers affirming Mary’s perpetual virginity include Athanasius, Epiphanius, Jerome, Ambrose, Augustine and Cyril of Alexandria.  Reference: Mary: Ever Virgin (This Rock: February, 2002) and Ludwig Ott, Fundamentals of Catholic Dogma, pages 203-206.
10. EARLY DOCTRINAL DEVELOPMENT
Mary referred to as “perpetual virgin” by the Fifth General Council at Constantinople in 553.  The first doctrinal formulation of this belief takes place at the Lateran Synod of 649 under Pope Martin I where Mary is called “blessed ever-virginal and Immaculate Mary.”  Reference: Ludwig Ott, Fundamentals of Catholic Dogma, pages 203-206.

Image: Black Madonna of Częstochowa (Public Domain, U.S.A.). Pope Francis prayed in front of this famous icon during his  World Youth Day visit to Poland in July of 2016. According to Joan Carroll Cruz, “the miracles attribited to Our Lady of Czestochowa are numerable and spectacular.” When my daughter Bridget Mulcahy visited the image in question at the Jasna Gora Monastery in Poland (during her WYD pilgrimage) she took the following photograph of the “wall of crutches” there which speaks to the miraculous, healing intercession of Our Lady of Czesochowa. Thanks Bridget! 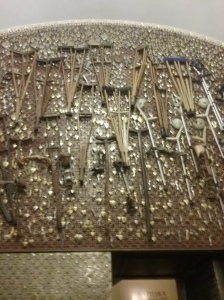 Any ads following in this note are by WordPress and not CatholicStrength.